A clutch of the north’s most visionary and people-focused companies were honoured last night at the eighth annual Irish News Workplace & Employment Awards in the spectacular surroundings of Titanic Belfast.

Representatives from a cross section of businesses/organisations, both in the public and private sector, were among the 500-strong audience. A record 20 awards were handed over to household business names like Eircom, Allstate NI, Lloyds Banking Group, Musgrave and O’Neill’s Sportwear. Belfast City Council and the NI Civil Service were also among the public sector recipients, as were two Derry schools in St Mary’s College and St Cecilia’s. 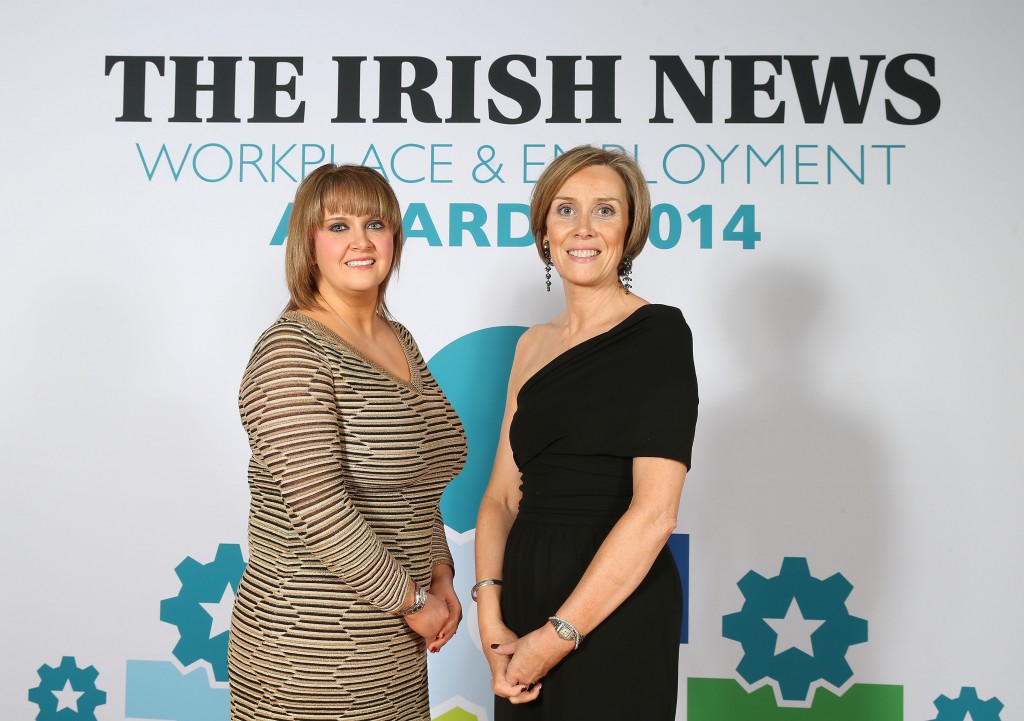 There was a number of new companies with their names being engraved on the iconic and much sought-after WEA trophies. These included Ballyrashane Creamery, TotalMobile and Belfast software company Automated Intelligence (which was the night’s only double award winner).

Indeed such was the interest in our newly-introduced Career Inspiration Award that it was sub-divided into four categories for small, medium, large and education, where the winners respectively were Young Enterprise NI, Automated Intelligence, Allstate NI and St Cecilia’s. This year a record number of companies entered; there was a greater number of entries from public sector, education, IT and manufacturing sectors; and in the judges’ opinions, the standard was unquestionably higher than any previous year. Guests dined out last night on a sumptuous meal which included Ewings cured and smoked salmon with toasted brioche grilled asparagus, soft quail’s egg and Glenarm caviar dressing, and Maurice Kettlye beef wellington with crispy frogs legs.

We’ve been overwhelmed yet again by the runaway success of the Workplace & Employment Awards.

This high-calibre winners’ list proves that, as our economy begins to pick up again, Northern Ireland possesses the visionary leadership and flexible working environment to thrive and prosper.

Stormont Employment and Learning Minister Dr Stephen Farry, who was a top-table guest at last night’s function (and whose department has been a staunch supporter of the Workplace & Employment Awards) since their inception in 2007, told the audience that the initiative reinforces the message that the north has people in its workforce capable of making “a real difference” to the economy.

If we are to compete in a global economic arena, we must continue to do all we can to drive up skills on all fronts, and facilitating the creation of a workforce equipped with the skills needed by companies within Northern Ireland is the strategic focus,” he said. “Skills are widely accepted as the key raw material required in any modern knowledge-based economy and are one of the main drivers in how we will achieve our long term economic goals.

Co Armagh-born Margaret Byrne, whose stellar career trajectory has taken her to one of the leading administrative roles in the Barclays Premier League as chief executive of Sunderland AFC, was keynote after-dinner speaker, taking guests on a journey into the trials and tribulations of the north east club’s boardoom.

The awards were supported by seven key business partners in Tughans, Liberty IT, Investors in People, Tesco, H3 Health Insurance, PowerNI and Titanic Belfast, and were endorsed by industry bodies the Recruitment and Employment Confederation (REC) and the Chartered Institute of Personnel & Development (CIPD).