A lack of public sector spending and a further retrenchment in infrastructure investment were the key factors in the reduction in activity during the second quarter of the year, surveyors report.

Workloads were also falling in the public housing sub-sector, according to a net balance of -13% of surveyors.

Private housing was the only construction sub-sector where activity was rising in Northern Ireland during the quarter, according to the survey, with private commercial and private industrial workloads reported to be flat.

Andy Tough, Chair of RICS in Northern Ireland, says: “The marginal fall in workloads in Q2 follows a softening in the data during Q1. This is being driven by weakness in public sector activity, with infrastructure and public-non-housing activity falling back relatively sharply. A lack of investment in infrastructure in Northern Ireland is a long-standing issue, but anecdotal evidence from chartered surveyors suggests that the current political situation in Northern Ireland is a factor. However, there are a number of other factors impacting on the local construction as well, including the slowdown in other parts of the UK where local firms are active, uncertainty in relation to Brexit and challenges in the planning process.”

“In relation to infrastructure, the recently announced additional money for Northern Ireland from Westminster looks set to provide a welcome boost for investment, but we also want to see a local Executive in place to ensure the delivery of long-term policies and decision-making that are vital to the development and growth of the economy,” Mr Tough adds.

Tim Kinney, Construction Partner, Tughans Solicitors, says: “Whilst the overall picture is one of contraction, it is encouraging to see that private house-building activity has continued to rise, contributing to housing supply as well as delivering important economic benefits. But we also need to see increasing activity in the commercial and infrastructure sectors too, for instance to increase the supply of Grade A office space and to create a more attractive offering to foreign direct investors. The construction sector remains crucial to the local economy in terms of employment, its supply chain, and the benefits it delivers to society, and government must play its role in creating an enabling environment so that essential investment, including in infrastructure, can happen.” 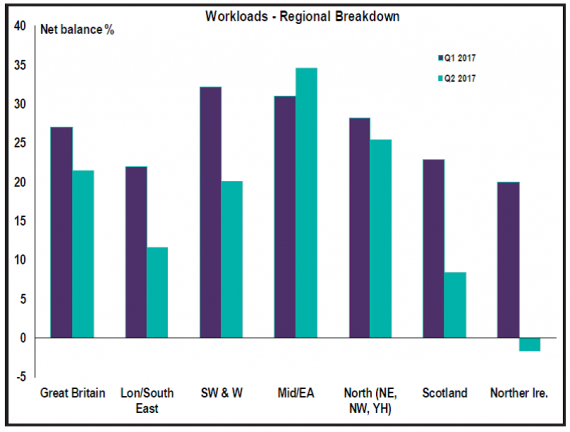