Despite high profile job losses, the most comprehensive survey of local manufacturers this year has identified a sector which is growing, putting on jobs, inflation busting pay rises and resilient in the face of power political headwinds.

The survey, conducted for Manufacturing NI and Tughans shows that the shadow of Brexit and local political uncertainty looms large and is impacting on the sector making a larger contribution to employment.

The survey, which included companies from all 11 Council areas, showed that 72% of respondents described their business as currently growing whilst 55% said they expected that growth to continue in the next 12 months.

45% of firms reported an increase in staffing levels with 55% expecting to take on more workers in the next 12 months.

Inflation, heavy taxation and VAT continue to challenge the sector with 60% of businesses also citing pension contributions and the Apprenticeship Levy as amongst their most prevalent concerns.

Uncertainty surrounding Brexit is also revealed as a key factor in business planning.  Businesses who export to the Republic of Ireland are particularly concerned with regard to its impact and the resultant status of the border.  In general Brexit is expected to negatively impact 41% of the businesses surveyed with a further 41% still unclear about what the future holds for them post-Brexit.  Only 11% believed that Brexit would be positive for their business.

Planning and infrastructure, green energy and GDPR compliance are all high on the list of legislative or policy areas of concern for the sector.

Stephen Kelly, Chief Executive, Manufacturing NI, says, “This is the most comprehensive survey that has been done of the sector this year.  Far from the sunset industry some may think, it shows a vibrant, successful and growing sector making a larger contribution to the economy and jobs and poised to have a bigger impact if we can provide them with the right political, economic and trading environment.

Whilst there is optimism for sustained growth, the survey also puts into sharp focus the many challenges faced by the sector particularly the lack of local governance.  The resultant stagnation with regard to updating legislation and introducing new policies is causing problems for some businesses.  Companies are also experiencing delays with getting new products off the ground and are having to shelve a number of projects until the political climate becomes more stable.  The clear message from the sector is an urgent need for clarity and direction on Brexit and on where our economy is going from a re-established NI Executive and Assembly.”

James Donnelly, Corporate Partner, Tughans, adds, “It’s good news to see the level of positive performance experienced by local manufacturers with 57% of respondents recording increased sales in the last year.  With the majority of surveyed businesses (83%) in recruitment mode it is a concern that skilled workers such as those with engineering and automated manufacturing skills are proving difficult to find.  Another reason why this sector, as well as the Northern Ireland economy generally, needs to see local government restored.”

The Manufacturing NI and Tughans NI Manufacturing Survey was carried out in May 2018 by Perceptive Insight.  Respondents represented companies from across Northern Ireland including those employing up to 1000 with the majority in the 10-49 bracket.  The top three manufacturing sectors who completed the survey were machinery and equipment; wood, paper products and printing; rubber, plastic and other non-metallic mineral products. 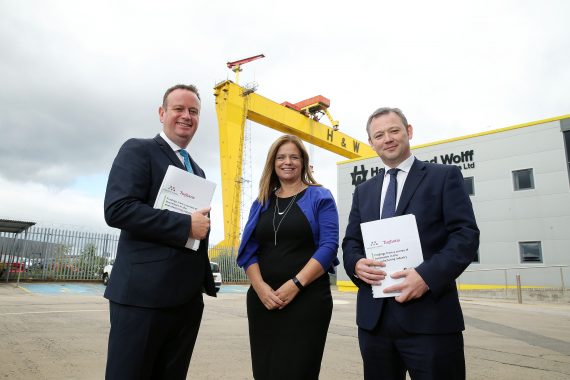 The key headline findings are as follows:

45% have boosted their workforce

72% describe their business as being in a position of growth

81% say their business has been profitable

Impact of uncertainty of Brexit (56%)

90% of respondents plan to invest in their businesses over the next year. Upgrading or introducing new facilities or machinery; increasing sales and marketing; increasing staff training; and R&D top the shopping list.

43% said that innovation support would be of value to their business.

In the last year 83% have recruited new staff