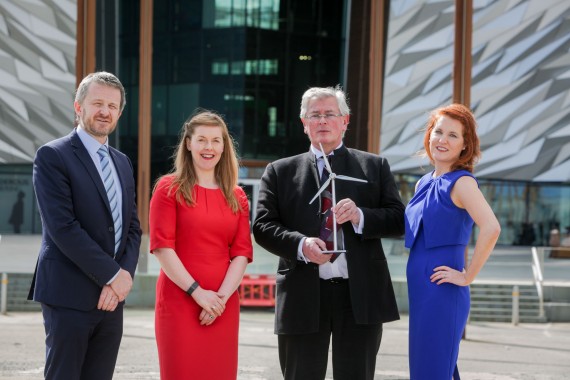 Now in their seventh year, the prestigious Action Renewables Awards were sponsored by Vayu Energy for the second year running, with additional sponsor support from Tughans Solicitors, a long-time partner of the event, and the Department of Environment, who joined this year’s awards in a show of support for the local renewables industry.

Speaking on behalf of Action Renewables, Director Michael Doran said, “Renewables are no longer looked at as an option for local businesses and are quickly becoming a necessary part of forward-thinking business practices.  Based on the growing interest in our annual awards, it is evident that more and more local organisations are harnessing the power of renewables, and we are delighted by the increasing popularity of our annual awards, which recognise those who are taking advantage of renewable technologies.”

Following the launch of their business into Northern Ireland, Mary Rossiter, Vayu Energy said, “It’s important to show our support for those who are embracing renewables on a local level, and we are proud to have partnered with Action Renewables for the second year to sponsor the annual awards luncheon.  As a supplier of 100% green electricity, we encourage all local businesses to seek ways of cutting costs, reducing carbon emissions, and decreasing their reliance on imported fuel sources by ‘going green.’”

“Every year we are impressed by the level of entries to these awards, “added Maria O’Loan, Planning and Environment Partner, Tughans.  “Tughans has been a sponsor of the Action Renewables Awards for a number of years and have witnessed the shift in entries to include more and more community groups and the third sector.  Renewables are quickly becoming the go-to solution for responsibly fueling Northern Ireland.”

Reflecting on their sponsorship of the awards, Angus Kerr, Director of Planning Policy Division, Department of Environment, said “The Action Renewables Awards are a great way to reward and celebrate steps local organisations are taking to reduce their environmental impact.  The level of entries this year has been outstanding, and would like to acknowledge all of the local organisations who are taking the future of our environment into their own hands by switching to renewables.”

Winners were chosen by an independent judging panel of industry experts and leaders in the renewables field across Northern Ireland including Carol Forster, Operations Manager, NIEL; Jim Kitchen, Director, Sustainable NI; and Andy McCrea, Renewable Energy Consultant and announced at a gala luncheon on Friday 31st March at Titanic Belfast.

The full list of winners at this year’s Action Renewables Awards includes:

For more information on the work Action Renewables does year-round to promote renewables in Northern Ireland visit www.actionrenewables.co.uk