Overall Northern Ireland construction workloads edged upwards in the third quarter of the year, despite a marked decline in infrastructure and public sector work, according to the latest RICS (Royal Institution of Chartered Surveyors) and Tughans Construction and Infrastructure Market Survey.

Infrastructure workloads and public non-housing workloads were both reported to have fallen by a significant proportion of respondents, with many citing the lack of decision-making in government as a key factor in the decline.

Private industrial activity also saw a fall in activity, according to a net balance of -11% of surveyors.

However, the overall workload balance was pushed into positive territory by rises in activity in the private commercial sector and in private housing.

Surveyors in Northern Ireland also continue to report shortages in quantity surveyors, other construction professionals, and blue-collar workers – most likely linked to growth in house-building activity.

Looking ahead, Northern Ireland respondents are the least optimistic in the UK about the next 12 months when it comes to both workloads and employment.

Jim Sammon, RICS Northern Ireland Construction spokesman, said: “While it is encouraging that we are seeing rises in the private housing, private commercial sector and public housing subsectors, the picture across other areas, particularly infrastructure, continues to cause concern.

“The fact that infrastructure and public housing workloads are in decline gives an indication of the impact the lack of decision-making in government is having on the ground.

“It is perhaps unsurprising that surveyors here feel a lack of optimism around workloads compared with the rest of the UK. In addition to being worried about the pipeline of public infrastructure work, the confidence of local surveyors is being impacted by the ongoing noise around Brexit.”

Michael McCord, Partner, Tughans, said: “In some respects it appears that there is a two-tier construction market at present, with some private sector activity forging ahead, while surveyors report declines in infrastructure and other publicly-funded activity”.

“When we look at the cranes in the skyline around Belfast city centre and the number of houses being built across Northern Ireland it’s not hard to understand the rises in private commercial activity and housebuilding in the last quarter.

“The infrastructure picture is much less optimistic though, and this is backed up by latest official construction output statistics by NISRA which point to public spending on new projects falling further, effectively meaning that new infrastructure work has flatlined.” 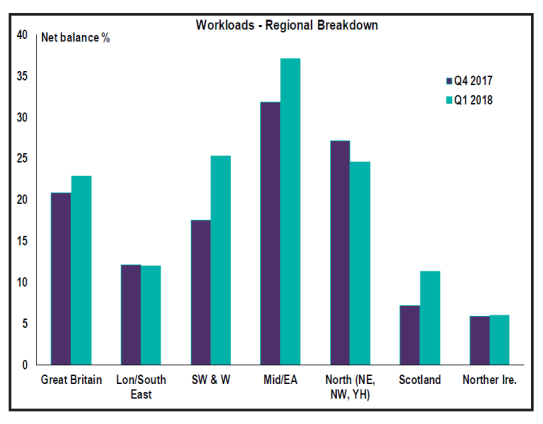 The key headline Northern Ireland findings of the latest survey are as follows:

email
We use cookies on our website to give you the most relevant experience by remembering your preferences and repeat visits. By clicking “Accept”, you consent to the use of ALL the cookies.
Cookie settingsACCEPT
Manage consent

This website uses cookies to improve your experience while you navigate through the website. Out of these, the cookies that are categorized as necessary are stored on your browser as they are essential for the working of basic functionalities of the website. We also use third-party cookies that help us analyze and understand how you use this website. These cookies will be stored in your browser only with your consent. You also have the option to opt-out of these cookies. But opting out of some of these cookies may affect your browsing experience.
Necessary Always Enabled
Necessary cookies are absolutely essential for the website to function properly. These cookies ensure basic functionalities and security features of the website, anonymously.
Functional
Functional cookies help to perform certain functionalities like sharing the content of the website on social media platforms, collect feedbacks, and other third-party features.
Performance
Performance cookies are used to understand and analyze the key performance indexes of the website which helps in delivering a better user experience for the visitors.
Analytics
Analytical cookies are used to understand how visitors interact with the website. These cookies help provide information on metrics the number of visitors, bounce rate, traffic source, etc.
Advertisement
Advertisement cookies are used to provide visitors with relevant ads and marketing campaigns. These cookies track visitors across websites and collect information to provide customized ads.
Others
Other uncategorized cookies are those that are being analyzed and have not been classified into a category as yet.
SAVE & ACCEPT