The survey also recorded a rise in the number of respondents saying that housebuilding had increased, with overall construction workloads therefore continuing to edge upwards although at the weakest rate in the UK (a workload net balance of +6%).

Meanwhile, growth in the private commercial sector saw a small rise in the three-month period, according to the net balance of Northern Ireland respondents.

But in the public sector it was a different story with lower levels of activity recorded in these subsectors. Public non-housing respondents have not reported growth for over one year while the net balance fell in the public housing sector. The infrastructure sector also saw a fall in workloads, according to the survey.

Jim Sammon, RICS Northern Ireland Construction Spokesman, says: “It is encouraging that housebuilding is continuing to grow in Northern Ireland and that the private industrial sector is at last showing some improvement.

“An increase in occupier demand for commercial property as shown in the most recent RICS Commercial Market Survey could be one of the reasons behind this growth in construction activity in the private industrial sector.

“Our respondents are continuing to point to the political situation as an impediment to growing construction workloads and we really need some progress on the political front to improve both confidence levels and investment.”

“It’s disappointing to see a fall in infrastructure workloads but as much of this work is publicly funded it’s perhaps not surprising we are in this situation while we have no functioning Executive to push forward key infrastructure projects.

“The most recent NISRA figures, which show a slump of 5.5% in infrastructure output in the last quarter of 2017, also point to the decline in spending on private infrastructure and while they show that public infrastructure activity rose it remains at a lower level compared to recent years.

“When we look around the city it is encouraging to see building projects underway, mainly of a private commercial nature, but much remains to be done to move major and much needed infrastructure projects along.” 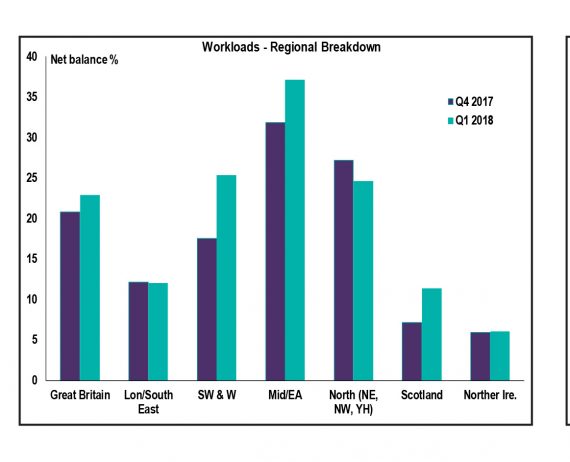 The key headline Northern Ireland findings of the latest survey are as follows: