Digital DNA 2020: Getting Back to the Future

Workloads fall but NI surveyors less pessimistic for 12-months ahead

Tughans to take part in Will Aid campaign

Tughans has maintained its position at the top of the Experian Deal Review and Advisor League Tables for the number of deals done in Northern Ireland in the third quarter of 2016.  The Experian Deal Review Report indicates that Tughans was the most active legal advisor in terms of volume for the first nine months of 2016 participating in 37 out of total 140 deals.

The report was carried out by the UK and Ireland division of global information services company Experian and the Northern Ireland League tables formed part of a detailed review of deal transactions in eleven UK regions and Republic of Ireland.

Manufacturing remains Northern Ireland’s busiest sector for M&A activity with volumes up by over 10%.  The financial services sector has been one of the biggest movers in terms of volume and value putting it in third position behind Wholesale and Retail.

John-George Willis, Head of Tughans Corporate Department commented, “ Maintaining the top position in the Experian Deal Review and Advisor League Tables, with 26% of announced deals, is a tremendous achievement and demonstrates not only the hard work and dedication of the Tughans’ team but also the continued faith put in us by our local and international clients. It is extremely pleasing for ourselves as an organisation, but it is also encouraging to see an increased level of activity in the marketplace.” 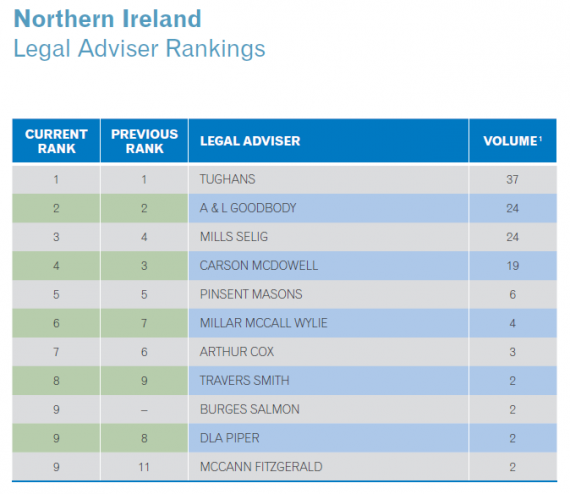