Belfast law firm Tughans has topped the ‘Experian Market IQ United Kingdom and Republic of Ireland M&A Review’ league table for Northern Ireland for the third consecutive year.  The firm was credited with 54 deals in total last year, representing a quarter of all Northern Ireland deals identified in the report.

Published this week, the Experian report, which tracks corporate deals over £500,000 and property transactions over £15million, describes Tughans as “by some way, Northern Ireland’s busiest legal advisor by deal volume in 2017,” with deal volumes 70% higher than the next placed legal advisor.

The report shows 221 Northern Ireland deals completed last year with a disclosed value of £1.68bn, a 5% increase on the previous year despite a 6% decline in the volume of deals down from 235 in 2016.  Manufacturing was Northern Ireland’s busiest sector for mergers and acquisitions during the year with 55 transactions, while the technology sector recorded high levels of investment activity.

Tughans’ submissions to Experian derived from a broad spectrum of sectors and included Fusion Antibodies listing on the London Stock Exchange (Alterative Investment Market) – only the third NI company listed, a series of acquisitions for global healthcare company Randox and for FP McCann – the UK’s largest manufacturer of precast concrete. Several funding rounds into local companies were recorded, these included coffee chain Bob & Berts, and tech companies B-Secur, AuditComply and Automated Intelligence.  The recent sale of Vita Liberata, the international skincare brand, to US based Crown Laboratories Holdings Inc. was also recently completed by the firm. 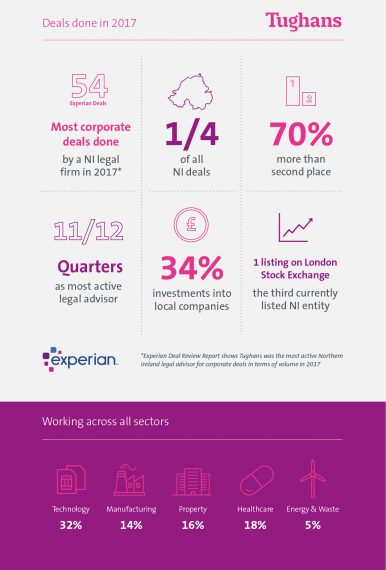 Patrick Brown, Managing Partner, Tughans said business across the Northern Ireland economy has been remarkably robust; “2017 has been strong for the firm in terms of corporate and real estate transactions, building on our performance across 2015 and 2016.  This has enabled us to top the Experian league table as most active legal advisor in Northern Ireland for 11 out of the last 12 quarters.

“In addition to the transactions identified in the report we have been engaged in a range of other high-quality matters across the firm, including working for Apple Inc. on their EMEA data HQ project, advising Invest Northern Ireland in the high-profile trade dispute between Bombardier and the US Department of Commerce, and acting as local counsel to Bank of America in relation to transactions worth over £400million.”

“The deal volumes signalled in the report are a positive sign that despite continuing uncertainty, both locally and nationally, there is still significant activity in the economy.   We are seeing an increase in the number of early stage venture capital investments into local companies, as well as established indigenous companies acquiring businesses to fulfil their own growth strategies.”

The report was carried out by the UK and Ireland division of global information services company Experian Market IQ and the Northern Ireland League Tables form part of a detailed review of deal transactions in eleven UK regions and the Republic of Ireland to view the complete 2017 report click here.