In what continues to prove a bumper year for Northern Ireland’s deal makers, the total value of M&A over the first nine months of 2018 reached £2.03bn, a 37.7% increase on the £1.48bn worth of deals carried out over the same period in 2017 and more than double that recorded during Q1-Q3 2016. This is the first time ever that deal values have risen above £2bn at this point in the year, and 2018 is shaping up to be by some way the most valuable year for Northern Irish M&A on Experian MarketIQ record. 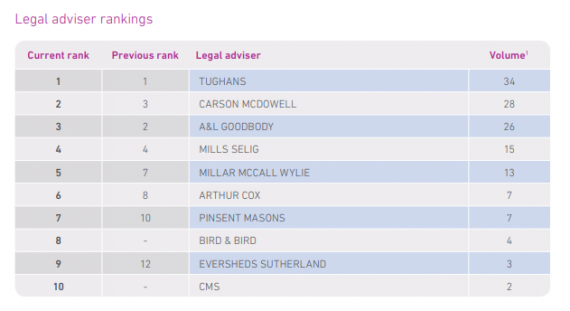 Tughans advised on 34 transactions up to the end of September 2018 to rank as Northern Ireland’s busiest legal adviser by deal volume.  This result follow Tughans successful run of being the most active adviser in all of the last three quarters in 2018 and No 1 ranked legal advisor for the last three years.