Tughans has topped the ‘Experian MarketIQ United Kingdom and Republic of Ireland M&A Review’ Northern Ireland league table for the fourth consecutive year.  The firm was credited with 59 deals in total last year, representing 27% of all Northern Ireland deals identified in the report.

The report shows 220 Northern Ireland deals completed last year with a disclosed value of £2.2bn, up by 28% on the transactions carried out in 2017 thus representing the most valuable year for M&A in the country on Experian MarketIQ record.  Manufacturing was Northern Ireland’s busiest sector for mergers and acquisitions in 2018 accounting for 26% of all transactions, with financial services and wholesale recording 23% and 20% of activity respectively.  Construction showed impressive growth where deal numbers were up by 33% on 2017.

Tughans’ submissions to Experian came from a broad range of sectors and included the purchase of Grafton Recruitment by Staffline plc, the acquisition of English company Guardman Group by Co.Tyrone based Westland Horticulture, Henderson Foodservices acquisition of RoI based Barbarrie Duckling Limited, investments into UForm, Elite Electronics and B-Secur, the sale of Farmvet Systems to international pharmaceutical company Vetoquinol and the sale of Camperco to Australian company Apollo. 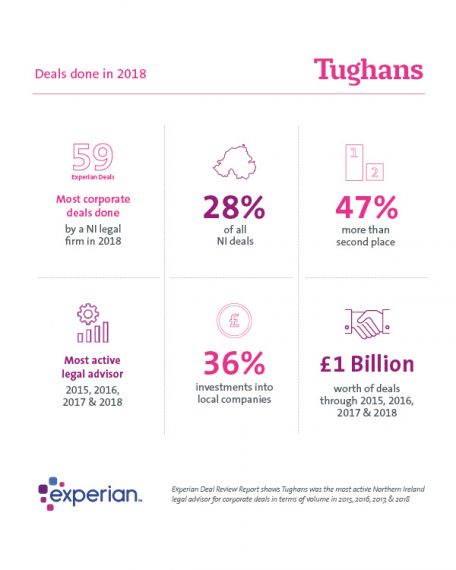 John George Willis, Head of Corporate, Tughans, says, “It has been another busy year for the firm, especially the corporate team, which is clear from the Experian results. The feature of this year has been lots of mid-market activity rather than the big one-off deals, which is a positive sign for the Northern Ireland economy.  Alongside the M&A activity we also continue to see a lot of investment into local companies from various funds from across the UK and RoI attracted to our local talent.”

Patrick Brown, Managing Partner, Tughans, added, “2018 has been exceptionally robust for the firm in terms of corporate and real estate transactions, building on our success over the last three years. The continuing growth in this area of our business, and indeed across the whole firm, has initiated a recruitment drive to further develop our client offering and expand our service provision.”

Jane Turner, Research Manager, Experian MarketIQ, says, “A ‘wait and see’ approach to deal making in 2018 might have been expected ahead of the UK’s fast approaching exit from the EU. Instead, new full year figures from Experian MarketIQ, based on the Corpfin global M&A database, show that businesses turned to M&A in record numbers last year. There was strong year-on-year growth in evidence across a range of sectors, while a flurry of mega deals, particularly in the pharmaceuticals and infocomms sectors, meant that overall value approached the record highs of 2015 and 1999. Access to finance remained readily available for companies looking to grow by acquisition, with private equity and debt-funded transactions on the up, while the level of cross border deals, both inward and outbound, remained healthy.”

The report was carried out by the UK and Ireland division of global information services company Experian MarketIQ and the Northern Ireland League Tables form part of a detailed review of deal transactions in eleven UK regions and the Republic of Ireland.